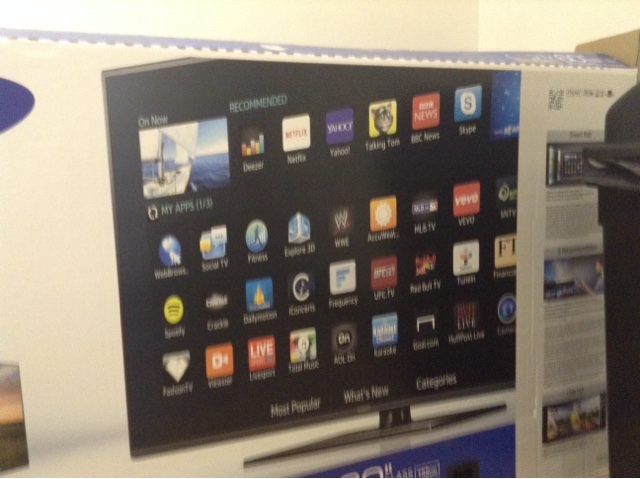 It's all about mobile apps, tablets and mobile music, as seem here on this Samsung TV that now appears just like your iPhone with icon apps, much like the touch pad of a beatmaker2 drum machine.....

Enjoy the vast capabilities of the iPad and iPhone when it comes to making your own, new independent recording artist music video productions.  Using multi iPads and iPhones, you can bluetooth the video footage from one device into the other device, and edit both camera angles through iMovie.  You can simultaneoulty record on garageBand, to get some great additional audio engioneering effects to go with your two different view point camera angles.

The capacity of the iPad, iPhone and other mobile or portable tablet devices,  to create, edit, upload, and distribute, all from one device in your pocket at all times TOTALLY changes the rules of video.  JUST like the Internet provides the first shift of opportunity for all small business to even the playing fieLd, because no longer do you have to have an unaffordable amount of money to buy a non existent amount of prime time slots, that, even if you could afford it, you never get it.   That's unfair that hard work can't play in the biggest marketing arena like TV has occupied for so long.  Now the tables have turned and so has the algorithm, and so it begins again for the first time.....the race of man against machine......to the stalwart, the relentless and the artist tip the cards ever so slightly, allowing the business hybrid artist just enough tell to know what much will provide opportunity if pursued to perfection.  Ah, yes, the visionary has few friends in the present tense so talk with, ever plotting ahead, battle an imaginary nemeses, meant to drive the mad crafter straight to the systematically correct conclusion.
Posted by Stimilon at 3:05 PM